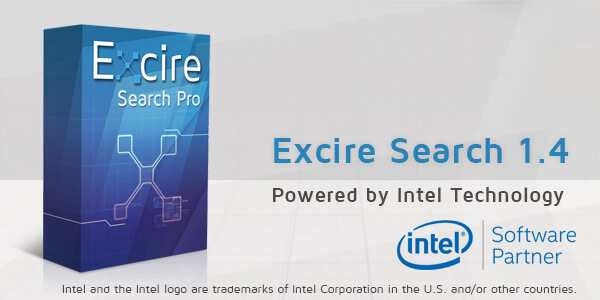 Video is in German – we recommend to enable Google subtitles.

The latest Excire Search version 1.4 is based on Intel technology, which allows a Lightroom catalog to be initialized faster. But why is that and how does Excire Search behave on an AMD machine?

To answer these questions, we need to backtrack a bit and first explain the structure of our software. Modern methods of automatic image analysis are based on so-called neural networks, which have been trained beforehand using examples. I.e. one shows a system many examples of the different image contents, so that it learns to identify the essential characteristics of these contents and to recognize the corresponding image content.

For example, in order for our image analysis module to recognize about 500 image contents, we showed a neural network more than 3 million photos. All this happens in a so-called training step that takes place during software development and on special hardware.

The trained network is finally part of Excire Search and is executed during an initialization for each image. This process is also called "inference". The speed of the inference is particularly important. The faster it is, the shorter the analysis of an image and thus the shorter the duration of the initialization of a Lightroom catalog. Not only does the architecture of a neural network play a role, but also the way in which the individual calculations of an inference are carried out.

The faster these calculations are, the shorter the analysis of an image. Hardware manufacturers like Intel of course know their processors perfectly and are thus able to optimize individual steps of the inference for their hardware. So if hardware and software are a good match, the possible acceleration is at a maximum. And this is exactly what our customers are now benefiting from as of version 1.4. because we have integrated Intel functions into our product. The faster the photos to be analyzed can be loaded, the greater the advantage of this fast inference.

Photographer Anthony Morganti took a closer look at the acceleration provided by Intel technology and created a video about it: